The Vancouver Rare Book, Photograph & Paper Show is coming up this weekend – Saturday and Sunday, October 7th and 8th at the Heritage Hall in Vancouver.

Yes, there will be postcards! Check out the Exhibitors’ gallery on the Show website to see a few of the grand cards that John Cheramy is bringing, including Early BC Fire Fighters and Sports Teams.

If you are interested in selling, check out the Visitor’s Information page now to contact an Exhibitor before the Show. 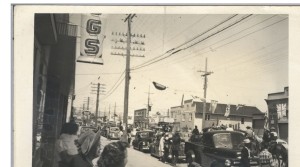 Yes! Tomorrow I’ll be at the Collector’s Show & Tell 1-2 pm at Cloverdale Branch Library in Surrey BC to show a fiew of my postcards and talk to people about collecting. There will be collectors of all kinds of neat things there 🙂

I see that the Library collection includes some books on postcard collecting  –  and even a few postcard mystery novels. This one for children, The Postcard by Tony Abbott (2008) looks as if ti involves both postcards and family history. I’ll have to read that one! (Listed as available at the Guildford Library Branch in Children’s Fiction, Call #:ABBOTT.)

And in the morning there’s a Genealogy Show & Tell from 10:30 to 12:30. That is always the most fun genealogy event of the year.

Come for both events!

Here is the link to Cloverdale’s event calendar.

Here are the links for the talk I’m giving today on 1909 era Alaska Yukon Pacific Exposition postcards. I will post some book titles later too. If you know a family member attended the AYPE, I’d love to hear from you!

When the World Came to Campus, Library exhibit, from over 1200 photographs and postcards in the collection, including many of Frank H. Nowell’s official ones, along with maps. brochures, scrapbooks, etc. http://content.lib.washington.edu/aypweb

A Memorable Enterprise, The AYPE and the City of Seattle. Seattle Municipal Archives: http://www.seattle.gov/cityarchives/exhibits-and-education/online-exhibits/alaska-yukon-pacific-exposition

Images of the Fair, Dan Kerlee, AYPE.com, many interesting images and asides, see an example of a photo permit, for instance: http://www.aype.com/AYPE_Camera_Permit.html

Renaissance Woman, Sandi Ratch, has been writing a series on her family postcards.

Postcards #1 – Banff [meaning Banff in Scotland] was the first. (This led to her discovering that there is a “little known” [!] town also called Banff in Canada. Gosh, I thought our Banff was world famous.)

Very interesting series of postcard articles – for me especially as it turned out that many were from or related to Canada. And along the way, Renaissance Woman has solved a number of little family puzzles. Always good to see!

Here’s a link to the latest article, Postcards #47 – Dick’s journey across Canada continued. These cards were written in 1915 by a Richard (Dick) Grant who died later at Vimy.